When would I need minimally invasive posterior cervical decompression?

lthough a majority of cervical spine issues can be treated using an anterior cervical approach there are instances where a posterior (back of the neck) surgery would be necessary. Your surgeon would inform you if posterior neck surgery is right for you. Here are a few of the common reasons to have surgery from the back of the neck: -if you have had multiple neck surgeries from the front or have had radiation to the area -if you have multiple levels of your neck that are involved -if it is safer to perform surgery from the back of the neck such as in the case where ligaments of the neck can become thickened and cause compression of the spinal cord 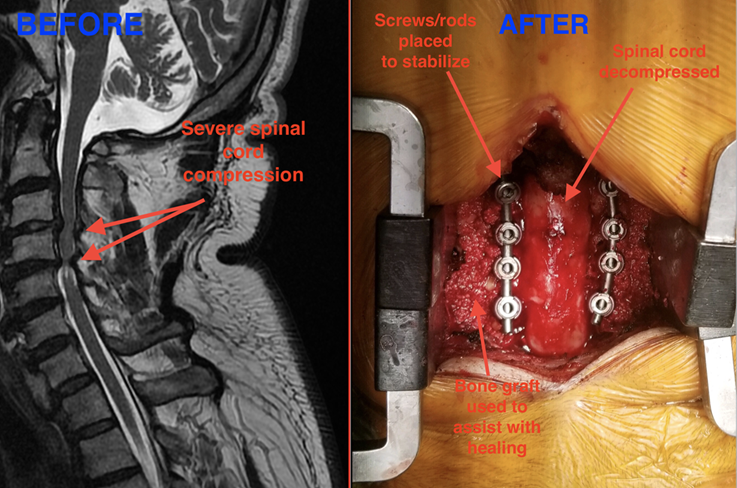 How is posterior cervical decompression performed?

sing fluoroscopic guidance (X-ray) the appropriate levels to be treated are identified and minimally invasive surgical dissection is performed down to the bone. Next, a small amount of bone is removed from the back of the spine. Only the minimal amount necessary is removed with a high tech minimally invasive bone cutting instrument in order to allow the surgeon to remove the compression off of the spinal cord. This is commonly referred to as a laminectomy. Minimally invasive cervical laminectomies can be performed without without requiring fusion of the cervical spine. The decision to perform a posterior cervical fusion in conjunction with a laminectomy depends on several factors and ultimately a decision made with your treating surgeon.

Patients with spinal cord compression requiring removal of pressure from the neck may benefit from a laminoplasty. This procedure is similar to a laminectomy, however, instead of removing the bone overlying the spinal cord (the lamina), it is instead cut with a high tech, minimally invasive cutting tool on only one side. The surgeon creates a hinge and elevates the lamina on one side, which increases room for the spinal cord. The lamina is then left somewhat hinged open but secured with very small screws which keep it from moving. One of the big benefits is that this procedure avoids muscle damage which comes along with having to remove the entire back side of the bone (lamina). Laminoplasty is an option for a select group of patients and your treating surgeon will inform you if you are a candidate.

What is a PCF procedure?

Posterior Cervical Fusion (PCF) is the technique of joining the bones in the back of the cervical spine. Over time these small bones fuse together to form an internal brace and stabilize the cervical spine, reducing painful motion or spinal cord compression.

Is Posterior Cervical Fusion (PCF) spine surgery right for me?

In the cervical spine (neck), surgery is often performed via the posterior approach to address a multitude of indications, including degenerative disc disease, dislocation, fractures, instability, or soft disc herniation. Your physician may determine that the PCF procedure is a good option for you, for example, if you require an interbody fusion, are skeletally mature, and have gone through six weeks of non-surgical treatment. Conversely, your physician may determine that a PCF procedure is not a good option for you, for example, if you are not a good candidate for fusion surgery in general due to other medical conditions. These conditions may be associated with a poor tolerance with regard to general anesthesia, inability to tolerate a prone position, and inadequate bone quality preventing adequate fixation of the instrumentation, as well as other indications. It is important to discuss this with your physician in order to determine the best course of treatment for you.

The field of orthopedic spine surgery has made impressive advancements in recent years with...
Read More

Platelet rich plasma, or PRP therapy is an innovative treatment option for injuries that...
Read More
Call Us Text Us
Skip to content